The Art of antiWAR

Remarques's heroic victims are still the heroes of the narrative; war is gothic horror, but that horror purifies and ennobles the guys on the ground, separating them from the power-hungry jerks back home who don't understand what war is really about. And if war is purifying and ennobling, if being good is equated with being at war, it's hard to see how that ends up being anti-war. It's not that Remarques and Kubrick see some good in the horror of war; rather, their narratives both end up treating the horror of war as the font from which good flows.

Maybe if you want an anti-war story, then, it might help to find a way to get rid of the story.

The book Above the Dreamless Dead seems like a good place to test that theory. The volume, released to commemorate the th anniversary of the start of the Great War, is a collection of comics adaptations of World War I poems. 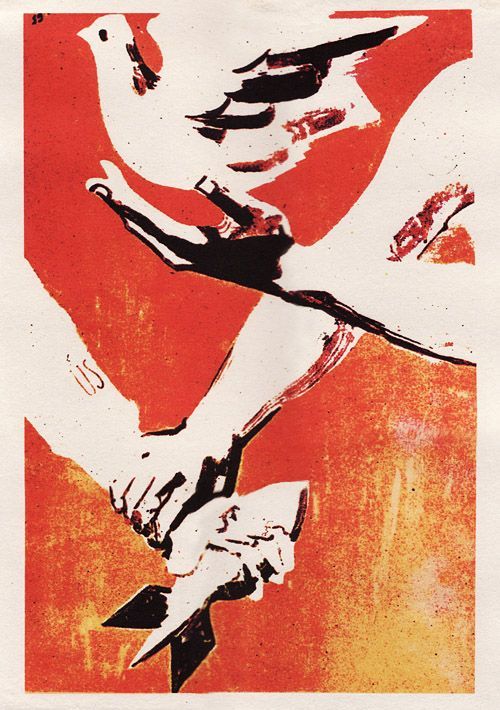 The volume is not entirely anti-war—the poems come from a range of positions—but it does include many writers who condemned the fighting, from Siegfried Sassoon to Thomas Hardy. Poetry is, of course, often less narrative-driven than novels or films, and the comics adaptations here serve to further fragment the text, interpolating spaces and images that break the rhetorical push of the poems apart rather than speeding them forward.

If narrative tropes give war an air of inevitability and purpose, then a combination of comics and poetry seems like it should offer an alternative vision. And in some cases it does.

Frances Edward Ledwidge's poem "War," for example, presents war as ominous, incomprehensible, and cool in a Dr. Doom-rant kind of way. The twee deflation verges on satire; war can rant on and on about its grandiosity, but all it amounts to is carrion for a mildly puzzled, vaguely Snoopy-looking canine.

There are other effectively anti-war efforts as well. Unable to reconcile the tragedy of her life with her newfound fame, Mardiganian went AWOL from the promotional tour before it even began, and the film company hired seven look-alikes to fill her shoes. Both films are painful, slow, horrific, and convey the unalluring reality of the violence that the Futurists so fetishized.

Chinese artist Huang Yong Ping also takes up the challenge of engaging Turkish life and culture by turning the top of a minaret at an angle and enclosing it in a cloth fence.

Surrounded by a cloth fence, the minaret is enclosed as if by a headscarf that both conceals and reveals. They are small figures in unremarkable landscapes, relaxing or talking beside the road that connects the Asian part of Istanbul with the European part. Turkey is a candidate for membership in the European Union, but several Western European government leaders have expressed doubts about including a predominantly Muslim country in the grand European project. As Cennetoglu suggests, the European governments have projected their long-held fears of violent Asian men — Ottomans, Huns, Mongols — onto the unarmed, benign figures of Turkish workers and peasants.

Sometimes the Biennale art is quite graphic in its depiction of violence. The mandala-like cycle of violence depicted in one poster, of a symbolic Moslem shooting a symbolic Jew shooting a symbolic Moslem and so forth around in a circle, refuses to assign primary responsibility to either side in the conflict. Pakistani Hamra Abbas sculpts life-sized figures in imaginative sexual positions from the Kama Sutra, and yet the men wield weapons.

The AES Group, the initials formed from the last names of three Russian artists, contribute a long, mural-like composition, Last Riot , that depicts hyper-realistic young people of various ethnicities in a kind of apocalyptic Benetton billboard. The girls and boys in battle fatigues are on the verge of choking each other, stabbing themselves hara-kiri style, and clubbing their younger charges and small animals, all against a montage of recognizable urban landscapes. Their faces reveal not anger or bloodlust, but merely bored resignation, as if playing a video game.

Finally, perhaps most subversively, there are the two large plastic Coke bottles, taped together and fitted with what looks like a timer, flashing ominously. This homemade Coke bomb sits hidden beneath a staircase inside the gallery space. In security-conscious Istanbul, where political violence is a recent memory if not a present reality, and in a world where we are constantly reminded that terrorism is no joking matter, this Coke bomb is pure effrontery. As with Joker in Full Metal Jacket , the horror of war contains grandeur and aesthetic truth. The narrative may be fractured, but the message isn't changed that much.

And if war becomes a source of meaning, it seems like people, and nations, will continue to try to find meaning in the glory, or the ugly truth, of war.

All day beneath the hurtling shells Before my burning eyes Hover the dainty demoiselles -- The peacock dragon-flies. Unceasingly they dart and glance Above the stagnant stream -- And I am fighting here in France As in a senseless dream. A dream of shattering black shells That hurtle overhead, And dainty dancing demoiselles Above the dreamless dead.

Her comic starts with a male figure staring enraptured at first one dragonfly, and then dancing with a swarm of them, until, in the last image, the creatures actually seem to lift him up by his clothing, carrying him off the ground. Violence is transmuted into joy; the shells disappear into the dragonflies—with only a shadow on the ground left to remind us, perhaps, of those dreamless dead.

Meaning here doesn't so much come out of war as come into existence despite it. We want to hear what you think about this article. Submit a letter to the editor or write to letters theatlantic.